Every digit has a visual symbol. For example: The number eight sounds (and looks) like a snowman named “Nate.”

Nina (pronounced “nine-uh”) the porcupine is always represented by the number nine. The product, 72 sounds like “sent-to-the-zoo”. Each picture card tells a story on the back so the teacher or parent can read the story while the child listens and watches. It’s easy for the child to remember the story and make associations with the numbers as they see and hear a fun and interesting story.

Nina the porcupine (9) got a letter and was crying lots of very big porcupine tears when Nate (8) the snowman came along. He asked Nina (9) why she was crying and all she could manage to say was: “Sent to the Zoo!” (72), “Sent to the Zoo!” (72). Finally she stopped crying enough to explain that she had just received a letter that said that she was going to be “sent to the zoo!” (72) and she didn’t want to be caged up! Nate (8) read the letter and said, “Nina (9), you read the letter wrong, it says it wants money “sent to the zoo” (72) to help feed the animals!” Nina (9) was so happy that she immediately sent $72 to the zoo to help feed the animals.

Questions for the Children

The Memory Joggers method is based on associations and rhymes. When asked, “What is 8 x 9?” It is easy to remember that 8 is Nate and 9 is Nina along with the story about how Nina thought she was to be “sent to the zoo” which rhymes with the product, 72.

The child has also learned their division facts. “What is 72 divided by 8?” The “72″ sounds like “sent to the zoo.” Eight is Nate and immediately they remember the other character, Nina or 9.

See which package is right for you »

My friend takes her daughter to a tutor for math because she was having lots of problems and she used your system and PRESTO! She gets straight A’s. Please send me the system for my child. 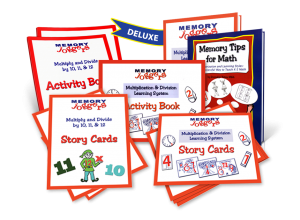 This Deluxe package provides everything needed for your child to learn how to multiply and divide all the facts from 0 through 12, PLUS our best selling book, Memory Tips for Math. LEARN MORE » 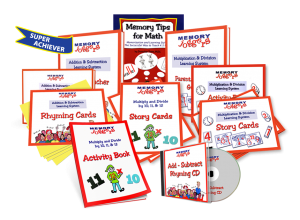 This package includes both our Math Learning Systems (Multiplication & Division as well as Addition & Subtraction), plus our most popular book Memory Tips for Math. Best value. BUY NOW »
×